Palmer Amaranth has become a well-known weed in the last couple of years. Prior to 2017, it was only considered a noxious weed in Ohio and Delaware; but since then it has gained noxious weed seed status in Pennsylvania, Iowa, and Minnesota, with pending status in Indiana.

A search of the term “Amaranth” in ASTA’s state legislative tracking systems reports 22 bills.  Among those bills, the only one that isn’t from one of the above mentioned states is Maryland HB 515. The original version of the bill would have added Palmer Amaranth to the noxious weed list, but it was recently amended to conduct a study of its impact. The bills from the other states deal mostly with funding for eradication. Waterhemp is mentioned in four bills (two in Indiana, and two in Pennsylvania), and marestail is mentioned in two (one in both Pennsylvania and Kentucky). It’s important to note that some states have mechanisms in place to add a weed or seed to the noxious list without going through the formal legislative process.

In the Louisiana legislature—which is now in special session—SB 169 would change seed test results to be confidential, and to only be made available to the requestor, unless otherwise specifically authorized by the requestor. It also defines “noxious weeds” as weeds that are injurious to the environment, agricultural fields, lawns, or gardens; and changes the requirement for seed labeling to note the year for which the seeds were packed for sale (instead of both the month and year). 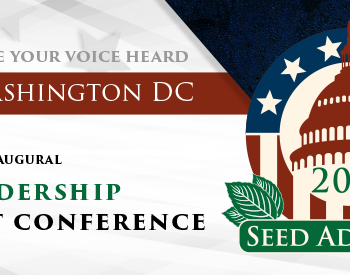 Applications Due TOMORROW for USDA South China Trade Mission in May